New Year's Eve in Iceland is really an amazing experience. The locals do like their fireworks so the sky is really up in smoke from about 11:30pm til about 12:30am.

New Year’s Eve in Iceland is really an amazing experience. The locals do like their fireworks so the sky is really up in smoke from about 11:30pm til about 12:30am. The show doesn’t stop there, it only slows down. People stay up late and fireworks will be on display every now and then until the early hours in the morning.

Today is a big day where families get together for a feast to celebrate. Icelanders are mad about their fireworks and they greet the New Year with a bang. There are bonfires in most areas around the city and the country where people get together around 9pm. Often singing together with a drink in their hand, usually there will also be some display of fireworks.

At 22:30 everything goes silent for an hour and hardly any fireworks are seen. This is due to a TV comedy program which is on the national TV and lasts an hour. In this program local comedians make fun of all the memorable things that happened during the year. This program than becomes the main talking point for the next week are so, some love it while others are always disappointed.

Coming up to midnight Reykjavik is more like a war zone than a peaceful island in Western Europe. If you want to take part in the madness we recommend you go outside Hallgrímskirkja Church from about 11:00pm. 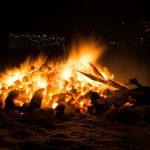 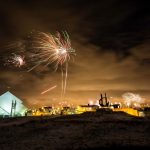 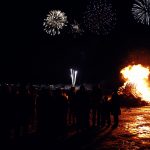 Today the majority of the nation will be hung over and will be thankful for the Premier League while relaxing in the couch at home. Some unfortunate souls might have an invite to their in laws and we do send them our deepest condolences.

If you found this article useful than we would love to hear about it in the comment section below.

€64
All year
About 2 hours
Find out more
Family Friendly

€55
All year
About 8 hours
Find out more

Into The Glacier & Snowmobiling

Into The Glacier – Langjokull Ice Tunnel